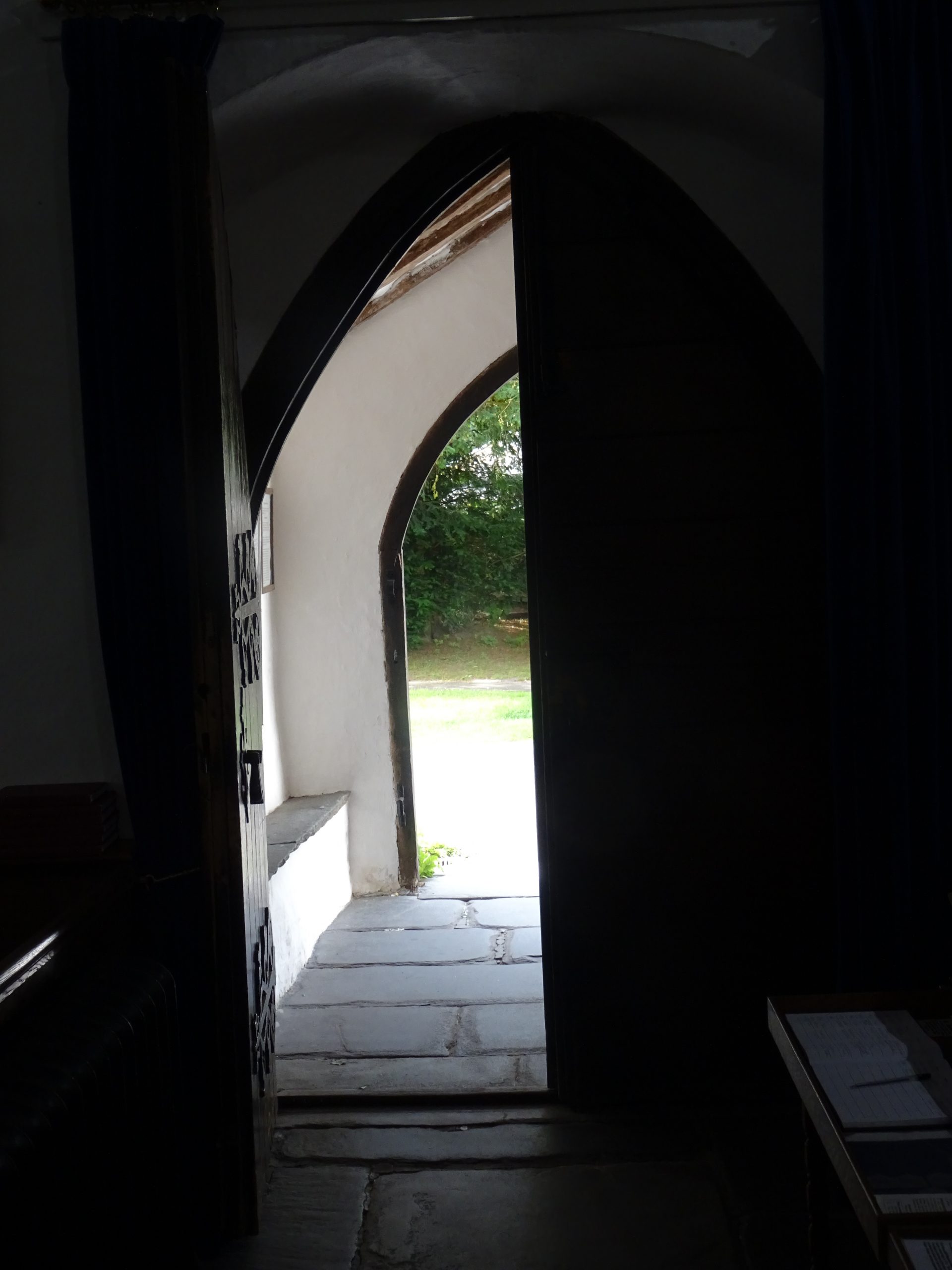 Today we hear the prophet Amos (6.1-8) offering us the picture of a basket of summer fruit to conjure with. If you`ve been picking blackberries or stewing fruit in recent weeks you might enjoy the image. At first sight it`s like something out of a country lifestyle magazine, we might think(!) And yet, for Amos and indeed, God`s people, this otherwise welcome image of ripeness, is, actually one of judgement.

Because, politically speaking, the people are ripe for destruction; they will be `eaten up` by their enemies. And what Amos brings to the piece is that behind this national crisis, is the hand of the Lord, who as we`re told, will no longer `pass them by` (or turn a blind eye to their folly) because now is the time to address their parlous state. In other words, we`re talking about yet another of those moments in Israel`s history where it`s becoming clear that they are failing in their vocation to reflect the glory of God to all creation. As Jesus would later say (using another harvest analogy): the light is firmly under the bushel basket. And so, in a devastating indictment we`re told: “The songs of the temple shall become wailings on that day,” says the Lord God.

It sounds grim. So, what`s gone wrong? And what`s it got to do with us? Well, let`s firstly get hold of what a Prophet, like Amos is actually doing. The Prophet doesn’t so much fore-tell the future. It`s sometimes said that they `forth-tell`.

What I mean is that it`s the task of the Prophet to speak what we might call, a word from `elsewhere`. The Prophet is the bearer of the Lord God`s perspective and insight. As the Lord of history, it`s for him to declare what the narrative actually is. And in this short passage, Amos shames the people by pointing out two ways in which they have lost the plot.

Firstly, (and he doesn`t pull any punches!) he points out that they lack any reverence for the Lord. Yes, they are dutiful enough. We`re told that they keep the festivals and the sabbaths but (and this is the point) their heart is clearly somewhere else. Amos makes it clear that Lord is not blind to how weary they are of all that Church-going and religious obligation. It`s obvious that they can`t wait for the religious stuff to be out of the way so they can get back to what they regard as the important business of buying and selling. It`s another version of what I`ve heard many times:  “I`ll go to the early service then the day`s my own”.

But then, secondly, the fact that their heart was not set on God has clear consequences. Amos points to their unconstrained greed and idolatry. Nowadays people might say that they had lost their `moral compass` but it`s more than that. To Amos, it`s clear that how you do God shapes how you do your relationships with others. A lack of reverence for him leads to a lack of reverence for others. In other words, that the creator and Lord of all is not the foundation and source of their lives, reveals itself in the list of sharp practices where (among other things) they cheat and steal, by rigging the scales and selling poor quality goods.

So, where does this take us? Well, firstly, let`s notice how Amos points out how a proper reverence for the Lord will colour our entire outlook and behaviour. It`s here that Amos painfully reminds me that after thirty-five years of ministry, I`ve noted how relatively rare it is for card-carrying Christian people to speak `Christian`. What I mean is that if for example, we`re commenting on the sharp practices and behaviours to which Amos refers, (or think of panic buying petrol!) we`re far more inclined to diagnose these things as a matter of formation, background or upbringing; or wistfully describe it as human nature. Everybody does it! Hardly ever do with think of attributing it to what Amos calls a lack or reverence for the Lord.

Put it another way, we seem far more at home using the categories of morals and values than the language of faith. But this is the truth to which Amos points us. This is the nature of what we call `sin`. That`s our word for all of this. How we do God is how we`re going to do everything else. What I`m saying is that the words which Amos speaks to the people of Israel speak to our own lack of spiritual seriousness. It`s a state of affairs which, as someone has observed, has left Atheists less and less in which to disbelieve. And it spells the death of what we might call a Christian imagination; our very distinct way of understanding and speaking of ourselves and the world.

And it`s not just that Amos points us in this direction; it`s the Lord himself who brings us a word from elsewhere, this morning, isn`t it? As I`ve observed before, the extent to which you find his words in today`s Gospel an outrage, impractical, unrealistic and objectionable is a measure of how far you (and we as a Church) have fallen. How far we have abandoned what the Book of Revelation calls `the love you had at first` (Revelation 2.4).

I mean, when Jesus says, “therefore, I tell you, (notice the tone of authority) do not worry about your life, what you will eat, or about your body, what you will wear. For life is more than food, and the body more than clothing…” Don`t we just wonder what planet he`s on(!?) But notice, he takes us to exactly the same place as Amos; the priority of God: “Strive for his kingdom and these things will be given to you as well”. The Lord me makes it clear that the Christian life has a singularity of purpose; a single reference point. As the Jesuits say, we are called to praise, reverence and serve the Lord… Everything else follows from this. How we do God shapes how we do everything else.

Now, secondly, if we`ve begun to feel the sting of what Amos brings us this morning we need to remember that prophets were doing far more than simply haranguing. Prophecy is not some ecclesiastical version of moaning! No, the `word` of the Lord spoken by the prophet is always a revelation of the heart of God. And if, for example, we are reminded of God`s justice, then, to coin a phrase, is always `restorative`. It`s captured well by the Prophet Isaiah.

His word to the people in similar circumstances, was this: “These people draw near with their mouths and honour me with their lips, while their hearts are far from me, and their worship of me is a human commandment learned by rote; so (and here`s the point) I will again do amazing things with this people, shocking and amazing, says the Lord” (Isaiah 29.13-14) You`re never done with the God of Israel!

So, Israel`s lack of reverence for the Lord was becoming obvious; it was playing itself out in the way they conducted themselves. And here we`re given an insight into the nature of sin. Because the attitudes and behaviours that we call `sin` are actually symptoms of that fracture in our relationship with the Lord. How we do stuff is a window onto how we`re doing God.

To put it another way, Amos and the other prophets teach us that there is a judgement and it begins now. And the good news is that whilst the word of the Prophet is often painful to hear because it gets to the heart of the matter, we also know that the heart of God is to restore, to bind, to heal.

It`s this that we see in Jesus, the prophet from Nazareth. As the image of the invisible God, he not only admonishes and calls and exhorts; he promises to provide a way. But, we have to do Jesus the credit of taking him seriously. He calls us to repent. To drop our agenda for living and trust him for his.

Yes, what he offers us in this morning`s Gospel is a complete overturning of everything the world has taught us about what living the good life is about. But of course, what he`s actually doing is describing for us what life looks like when it`s the right way up. When it is lived with a heart full of reverence for the Lord. Jesus`s words come to us as if from `elsewhere`; a different sphere; but they are a glimpse of things as they truly are.

Like Amos, he exposes our folly and calls to choose sides. He calls us to die to a way of living in the world which does not reverence the Lord. He calls it `entering the Kingdom`. But it`s no accident that Jesus calls himself, `the way the truth and the life`. The heart without reverence for the Lord; the life lived as if he is not God can and will be transformed in those who turn to him.

Which is why he says: “Come to me, all you that are weary and are carrying heavy burdens, and I will give you rest. Take my yoke upon you, and learn from me; for I am gentle and humble in heart, and you will find rest for your souls (Matthew 11.28-9)

On October 3rd at 7.00pm at St. Mary’s in RYDAL we shall resume our monthly Taizé Prayer: evening prayer for Christians of all traditions. END_OF_DOCUMENT_TOKEN_TO_BE_REPLACED

Our Gospel reading this morning begins with the simple statement: “They went on from there….” (Mark 9.30-37). END_OF_DOCUMENT_TOKEN_TO_BE_REPLACED

In recent times we have heard about the emergence of what’s called ‘the snowflake generation’. END_OF_DOCUMENT_TOKEN_TO_BE_REPLACED

It’s sometimes said that if you want to gain a better perspective on life – especially if you’re a bit down in the dumps – then the best thing to do is pay a visit to the children’s ward of the local hospital. END_OF_DOCUMENT_TOKEN_TO_BE_REPLACED

Some years ago, I saw a Television programme which followed what happened when a group of what we might call ‘ordinary people’ took part in an eight-day silent retreat.  END_OF_DOCUMENT_TOKEN_TO_BE_REPLACED

I have the greatest of sympathy with couples preparing for their marriage these days. But considering the sheer amount of advance planning, the attention and effort that goes into it all (not to mention the cost) I do sometimes wonder, “Whatever they will have to talk about after the ceremony?” since this ‘project’ has absorbed so much of their time and attention for so very long? END_OF_DOCUMENT_TOKEN_TO_BE_REPLACED

Among the stories my Father told me about his National Service was his account of what happened when his group of recruits reported for duty. The Officer in Charge decided that he would sort them out according to their religious affiliation. Apparently, it was very simple. Firstly, there were the Catholics. Then there were the Jews; and anybody else, (no matter what they said!) were automatically categorized as ‘Church of England’. END_OF_DOCUMENT_TOKEN_TO_BE_REPLACED

The Roman Catholic comedian Frank Skinner was recently quoted as saying that “you can be anything in Britain today except a Christian”. END_OF_DOCUMENT_TOKEN_TO_BE_REPLACED

Visitors feel they ‘belong’ here, in the quiet of a weekday visit or for Sunday worship. More…

How to Find Us