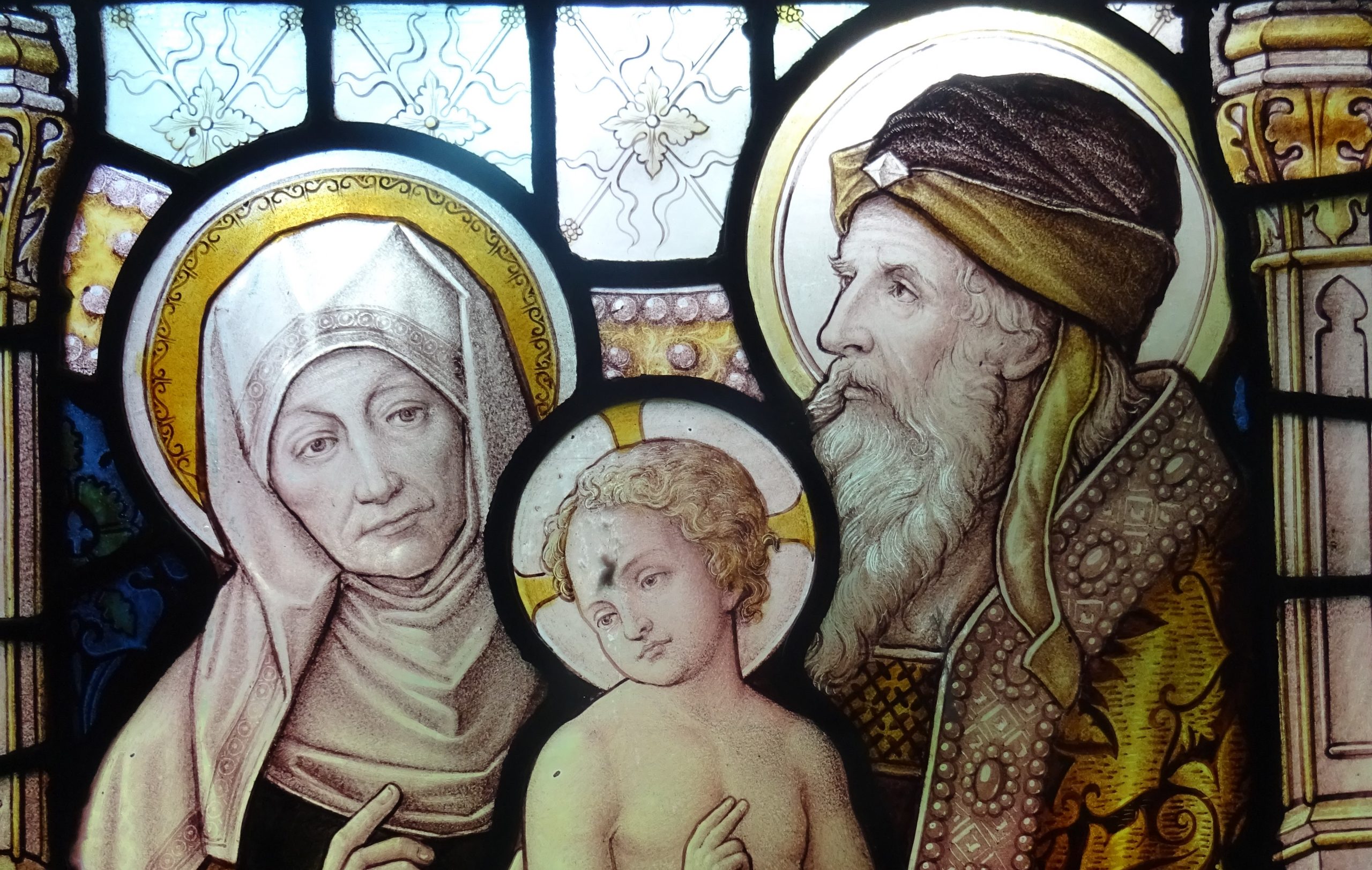 One of the things I’ve been trying to do with our school children in recent months is to give them a sense of what the Christian Year looks and more especially what it ‘feels’ like. So, as you might imagine we’ve been talking about Advent and its sense of waiting and expectation. We’ve thought about Christmas and the Lord literally entering into and appearing to the humblest places and people. And they’ve learnt to notice the changes in the building; the ‘clues’ in this place which indicate what’s going on. We’ve noticed the Advent Wreath, the Crib and the colours changing from Purple to Gold and so on.

Now, in the last few weeks, we’ve been focussing on this season of Epiphany. We’ve had a think about what we see. In other words, ‘Epiphany’ means looking a bit more closely; and more deeply. Epiphany is about seeing things which are not entirely obvious at first glance. Epiphany is what’s ‘revealed’.

So, we thought about the visit of the Wise Men. And the point is that whilst they were presented with a baby in a manger (of all things!) what they ‘saw’ and what was revealed to them was a king. At one point I asked the children how the wise men might have felt and one little girl said, “They went Eeek! and Wow!” And that helps because, after all, we’re talking about an encounter with the ‘holy’. So, perhaps we would do well to note how being unnerved and astonished; “Eeek! and Wow! might be a sign of any authentic Epiphany and maybe learn to welcome it.

Now the point behind all of this is of course, is that not everybody “gets it”. St. John famously tells us that Jesus “came to his own and his own received him not”. So, here’s the conundrum, if you will. this is the tension. Some of us ‘get it’ and some of us don’t. This is a point St. Mark wants to emphasise in his Gospel. His whole project is shaped not so much as a ‘who-dunnit?’but as a ‘who-is-it?’. Because at every turn you see people trying to fathom out who this Jesus really is. Which is why blindness and sight are key themes in the Gospel. And again, it’s not so much to do with cleverness as awareness. It’s about being open to revelation.

So, the Epiphany season helps us focus on the revealing action of the Lord. This is the central theme. Our Sunday Gospels take us from the Wise men to the wedding at Cana (the first of his ‘signs’, as John puts is), to the Synagogue at Nazareth where they all ask, “Who does he think he is”? to other places like the storm on the Lake where they say, “Who is this that even the winds and waves obey him?”

And Epiphany reaches something of a climax in what we call Candlemas; which is next Wednesday. The Candlemas Gospel reading is the one we heard a moment ago; and here’s yet one more ‘epiphany’ or moment of revelation. Today, we heard about Joseph and Mary taking their child to the Temple where they meet Simeon and Anna; two faithful, elderly folk who see, what on the face of it was just a poor couple with a baby. I mean, the offering of the pigeons is a clue as to how hard-up they were. But behind all of this, the living God is made known. Epiphany!

So, what do we learn from this story? Well, firstly let’s just notice that the underlying conviction in all of these passages is that it is in the nature of our God to ‘reveal’ God’s self. That’s the direction of travel and it’s important to get that straight from the outset. What’s at stake is how open and receptive we are.

Secondly, it helps to be aware of the challenge we face. The time and culture in which we live; and not least the habits of thought that we have inherited mean that our current age is marked by what’s been called ‘disenchantment’. A certain opaque flatness to the things of God. Since around the eighteenth century and the worship of reason alone we’ve been left with a universe which Charles Taylor calls “dull, routine, flat, (and) driven by rules rather than thoughts… specialists without spirit and hedonists without heart”.

Now, what’s happened is that the God who reveals himself in Christ; the ground of our being is now automatically reckoned instead to be a thing at a distance; dispensable and no longer welcome in a world that revolves around us, thank you very much. This is the way we have been brought up. This is how people think these days. So let’s not underestimate the challenge we face from within and without and what difficult territory we have to work on.

But then, thirdly (and linked to this) we not only have a false sense of God and the world but also a false narrative or story. A prime example is the way we are sucked into what I can only call something of a ‘death wish’. So, statistically speaking we might look at the Church and conclude that we have problems when it comes to the numbers game. So, everywhere you look, Christians are becoming depressed and argumentative about the future.

Now, of course there are issues. But here’s the Epiphany. All we are actually doing is playing the world’s game. It’s the world that for instance, says ‘numbers are paramount’. It’s the world that categorises church as a human creation; an organisation like any other. It’s the world that would define worship as something I ‘get’ something from; rather the offering of my life in response to God’s grace. But we don’t see it and we forget that we have a different story to tell.

And what an antidote to all of this, are people like Simeon and Anna. I wonder if, like me you have a fondness for that line in the Christmas Carol: “Where meek souls will receive him, still the dear Christ enters in”? Because that about sums it up really.  I mean, it’s not just that such meek souls have a transformed picture of God; that they act and think very differently. It’s not just that they know there’s a different story from all that ‘hedonism without heart’. No, they have their feet firmly planted in the real world of God and his kingdom; they can see what is opaque to those immersed in a flatted and disenchanted universe.

So, Simeon and Anna teach us firstly, that when you worship a revealing God, you can wait. Simeon had been told; indeed he was promised, that he would see the Lord’s Messiah. Maybe this was the only other epiphany he’d known but he didn’t have to force anything. He was patient upon that word.

Secondly, his life is marked by reverence. There in the temple he’s steeped in the daily prayers of God’s people; and this is important. Contrary to the impression many would give, the Christian faith is never our own private ‘spirituality project’. Simeon’s prayers and patience were with and alongside the whole people of God; a people God had brought into being. It wasn’t all about Simeon.

And thirdly, Simeon knew in his very gut that the whole purpose of God is summed up in that word ‘salvation’. Things need fixing. As I said, last week, the epiphany is the truth that in the child of Bethlehem what we really see is ‘God on a mission’. Everything, in other words, points to the cross.  So, this ‘epiphany’ there in the Temple is good news because it’s the announcement of judgement; God putting his world to rights. That’s why Simeon said to Mary, ‘This child is destined for the falling and the rising of many in Israel, and to be a sign that will be opposed so that the inner thoughts of many will be revealed – and a sword will pierce your own soul too.’

There’s nothing sentimental here. It’s far from comfortable we might think but perhaps it’s we who should stop being coy about that word judgement. I mean, if we’re honest, only those on top of the heap; comfortable westerners, such as ourselves will play this down in favour of sentimentality. But when you are at the other end of the pile the point is that you pray very differently. You have a much keener sense of the world’s need, our need of a saviour.

But there’s more, we have Advent, Christmas, Epiphany….and then, Lent. One of the readings we hear at the start of Lent comes as a question: “Why should the people say, where is there God”? It’s something of a taunt and another word of judgement because in this next season we have to face the all too tragic reality that in so many ways we fail to be an ‘epiphany’ of the presence of God. Or, part of the reason some people don’t ‘get it’ is because we fall down on the job, hiding our light under a bushel basket.

That is, living in a disenchanted, rationalist world, we lack that bigger vision of the revealing God and what’s more lack the patience and reverence of a Simeon. All because the significance of the cross (that was signed on your forehead in Baptism) is not part of how we understand what or God is about is about. Anyone would think that it’s we who appear not to ‘get it’.

Well, the solution (if that’s the word) to all of this lies in the word ‘grace’. ‘Grace’ is the saving work of God; to which we assent… to which we make a daily ‘yes’. So, we pray for the grace to become a vehicle a bearer of that same saving grace to others. Which is why the Epiphany prayer is one of my favourites:  Almighty God, in Christ you make all things new: transform the poverty of our nature by the riches of your grace, and in the renewal of our lives make known your heavenly glory; through Jesus Christ your Son our Lord. Amen.