History of the Organ

There is no evidence of an organ or other musical instrument in Grasmere Church before 1872, however, the purchase for 7s 6d of a new pitch pipe, to be used by the clerk who led the singing, appears in the accounts of 1829. The pitch pipe is on display in a cabinet at the east end of the Langdale aisle, next to the organ.

In 1872, a two manual Wilkinson organ was installed. This was an instrument of good quality with 10 stops on the Great and 6 on the Swell. In 1923 it was rehoused in Lancaster Baptist Church, a move involving a reduction in size of the Great. In 2000, the Wilkinson was moved once again, this time to All Saints Church at Boltongate, south of Wigton. The organ still plays well.

In March, 1923, Mr J Taylor of Helmside, Grasmere, placed an order with J J Binns of Leeds for a new organ for Grasmere Church. His donation was in memory of second daughter, Nellie Taylor, V.A.D., who was attached to the 10th Motor Ambulance Convoy, British Red Cross. She died in France on June 27th, 1918. Nellie, who had been a fine musician, was interred at Mont Huon Military Cemetery, Le Treport. 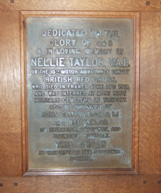 The organ was three manual with patent tubular pneumatic action. Technically and artistically, it was of a high standard: “The soundboards, tables, bearers, etc., are of straight-grained mahogany… The keys are of the best double-bleached ivory and the sharps of ebony… The solo and softer registers have a rich and delicate quality” (Westmorland Gazette, October 6th,1923). The case, of Austrian oak, was constructed by Grasmere craftsmen, Messers. T Wilson and Sons and the entire installed at the east end of the Langdale aisle, necessitating the removal of the vestry to the west end where it had been a hundred years previously. 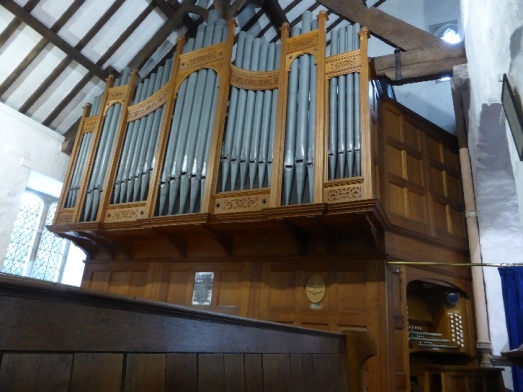 In 1964, renovations were carried out by J W Walker & Sons of Ruislip. The Great received most attention. The original Trumpet was replaced by a Tromba, the Flautina moved to the Choir, the Medium Open Diapason softened to a Small Open Diapason and a new Fifteenth and Mixture were installed. The Choir’s original Gamba was removed to make way for the Flautina. The Swell and Pedal sections are unchanged since manufacture.

In 1994, Victor Saville overhauled the organ section by section, and in 2004, a new humidifier and bellows for the Tromba were fitted. At the same time, a two-stage ladder was installed within the organ case to improve access.

A full specification of the Organ is available.

Music has a fine and long tradition at St Oswald’s Church. Andrew Seivewright (1926-2010), former Master of the Music at Carlisle Cathedral, was organist and choirmaster here from 1994. A recording of “Organs of the Lake District” is available on the church bookstall, and includes several tracks recorded at Grasmere in August 2016 by the present Director of Music, Ian Hare.

It is proposed to renovate the organ in time for its centenary in 2023, and donations are invited.