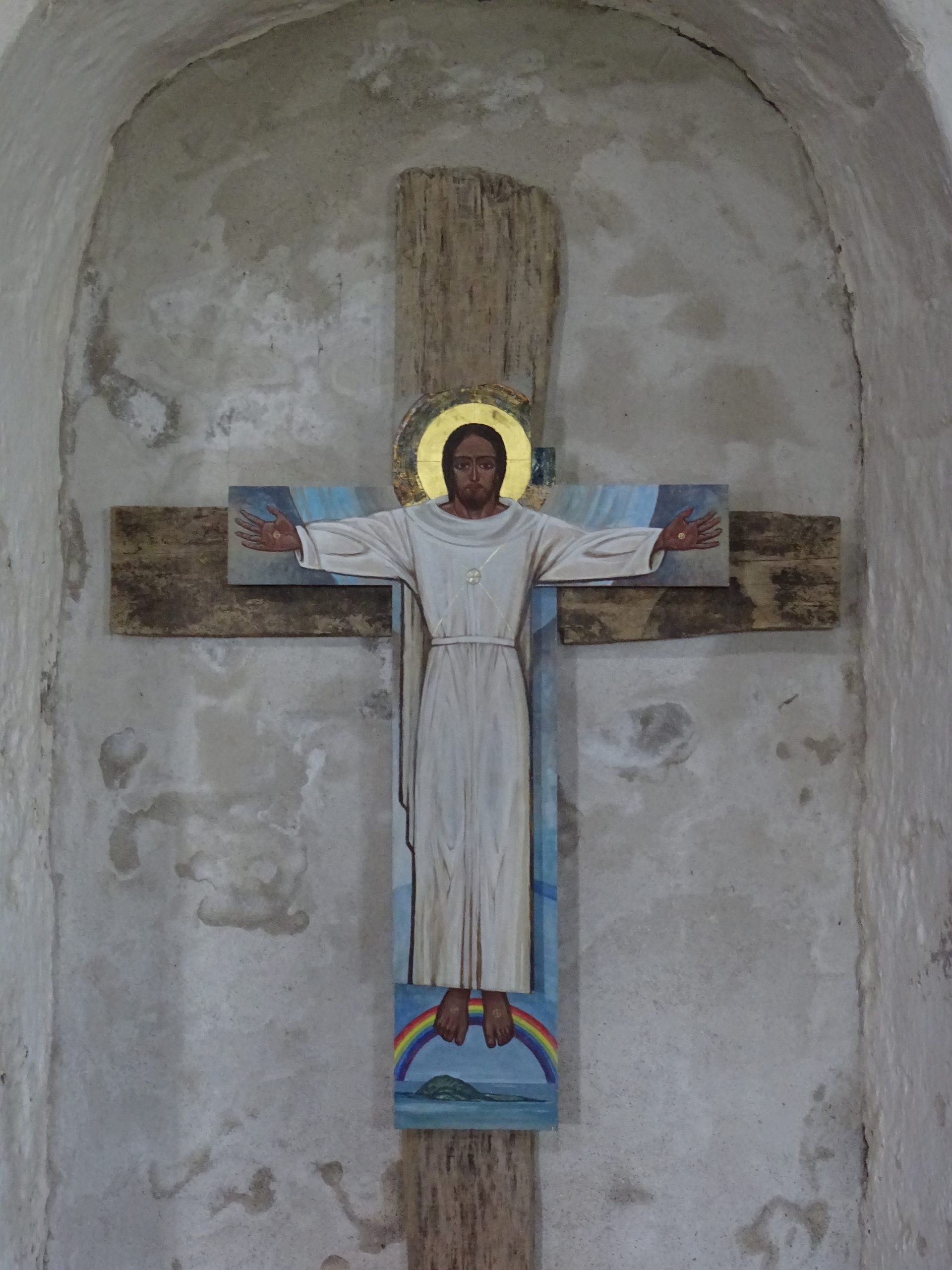 Quite a large part of what we call the New Testament is written by St. Paul. And one of the helpful things about this, is what a fascinating insight we get into what life in the earliest Christian communities was like; what issues they were facing and how they wrestled with being faithful. This morning we heard a very small passage from the Letter which Paul wrote to the Church in Philippi and I’d like us to focus on the first couple of lines: “Brothers and sisters, join in imitating me, and observe those who live according to the example you have in us. For many live as enemies of the cross of Christ” (Philippians 3.17-4.1)

Last week, when we discussed the Temptations which Christ faced, I put it to you that the foundational issue was “what kind of Messiah he was going to be?”. We learnt that Jesus has an agenda. He doesn’t, at the devil’s suggestion, take the ‘short cuts’ of meeting needs, courting popularity and wielding power. On the contrary, he is set on a path which will truly reveal the heart of God. He takes the way of non-violent, self-giving love; the way which leads him to the cross.

Now what Paul is having to do in this passage today, is to point out how certain folk in the Philippian Church not only don’t seem to understand that their own lives must reflect the same agenda as Christ. No, they are like Peter in that stand-up row he had with Jesus. They have ‘set their minds’ on earthly things rather than heavenly. Using strong language, he insists that they are ‘enemies of the cross of Christ’. So that leaves us with the question; “What does, being ‘an enemy of the cross of Christ’ look like?”

Well, firstly, an enemy of the Cross of Christ fails to acknowledge the reality of the fight; and what’s really at stake. At the heart of the Gospel that we lay before people, is a picture of God’s creation that was declared ‘very good’. The Book of Genesis tells us of that harmony and right relationship between God and his creation; and between us, his creatures.

The fracture in this relationship, what we call ‘the fall; means that we have turned in on ourselves; and so, our lives are marked by a seeking to live as Kings and Queens in our own little domain. This besetting situation is called ‘sin’ and it’s verifiable, as I say, not just in the news reports but in our everyday experience and behaviour. Part of the problem is that we live in a world that doesn’t accept this diagnosis. We live in a world which continues to be surprised by manifest evil. In recent weeks I’ve lost count of the number of times I’ve heard people say that surely things should be different “in this day and age”.

But this is the great lie that we have been taught since the eighteenth century. We’ve been taught to believe that we can perfect ourselves. That things (whatever that means) will inevitably get better, for example, with all our technology and so on and so forth. Now, this is utterly naïve but the point is that the Christian faith of so many has imbibed this nonsense, to the point where it resembles little more than an occasional Sunday self-improvement plan with candles! (and incense if you are into that kind of thing!).

But of course, whilst our physical and material well-being may indeed improve; (and we’re grateful) the heart doesn’t.

So, consequently, our ‘self-improvement faith’ is simply bankrupt in the face of evil. And so, it should be. For this is what happens when we forget that the Gospel of the cross says: “While we were yet sinners Christ died for us”. No, our deepest conviction is that on the cross, something objective has been done to deliver us from this mess; this subjugation to the tyranny of self. More than this, we’re talking about the turning point in all history. As Paul says elsewhere, “God was in Christ reconciling the world to himself”.

These are enormous claims. But at the end of the day, everything points to the cross. And if we’re at all serious about keeping company with Christ, then let’s be clear, we’re in the company of a Saviour…. Not a self-help guru. An ‘enemy of the Cross of Christ’ fails to embrace his ‘saving’ work.

Secondly, we’re an ‘enemy of the Cross of Christ’ when we deny what has been achieved there. In this short passage Paul offers the Philippians a clever analogy. He says, “Our citizenship is in heaven”. Paul knew full well that the significant thing about Philippi was that it was designated as a Roman colony. In other words, it was a little piece of Rome built in otherwise enemy territory. So, when he wrote in similar fashion to the Colossians, he told them, God has “rescued us from the power of darkness and transferred us into the kingdom of his beloved Son”; in the same way he wants the Philippians to appreciate that they are now an outpost of the Kingdom of God; heaven on earth.

To put it another way, Paul is trying to impress on us that we have received a change in citizenship. Through our Baptism (which isn’t about babies!), we have died to the old ways dictated to us by our sinful nature; with all its obsessing about power, prestige and possessions and he goes so far as to call us a “New Creation”. Now, of course, it doesn’t always look like it; and it certainly doesn’t always feel like it. But the invasion has begun.

We live between the times. Paul says we ‘groan inwardly’ while awaiting the completion of it all. But the truth about us, is far greater than we appreciate. How do we deny this? Well largely, I think by our attitude to ‘the Church’. We have imbibed from our culture the notion that all this religion is essentially a private and individual thing and that meeting with or being part of a community of believers is optional at best. But I return to my initial point; Paul is addressing his letter to Christians, ‘plural’. Our entire heritage, our story, is of God’s dealings with his people.

One of the signs of being the Messiah, which Jesus embraced, is that he would ‘gather’ the tribes of Israel and lead them (plural) to fulfil their vocation to be a light to the nations of the world. Instead, we have for generations imbibed this nonsense that you, “Don’t have to go to Church to be a Christian”; and let that go unchallenged. Whereas the New Testament talks about “being” the Church. It is we (plural) who (get this!) are now the Body of Christ in the world. Or as St. Peter says, “You are a chosen race, a royal priesthood, a holy nation, God’s own people, in order that you may proclaim the mighty acts of him who called you out of darkness into his marvellous light”. So, we’re an ‘enemy of the Cross of Christ’ when we deny what was created there; a renewed people of God.

Thirdly, we’re an enemy of the cross of Christ, when we assume that there is no cost to the Christian life. In the Basilica of St. John Lateran, in Rome is the tomb of Pope Leo 13th, who was Pope towards the end of the 19th century. The curious thing about his tomb is that unlike many other Popes (who are depicted lying on their back with hands piously clasped together), Leo 13th is seen standing up with his arm raised as if to catch the world’s attention.

The artist who designed the tomb wanted to capture something of his spirit, which was, in challenging times, to say to the world, “we have a proposal to make. We have an alternative view of the world and our place in it”. There’s something profoundly important about this. We don’t impose anything on anyone; but we do propose. We tell the story of a Saviour, a motley group of people called the Church; and an alternative way of living in the world which from the very beginning has been mocked, derided and rejected. I’m not being unduly negative.

I’m pointing out that we have been cushioned for generations. Since we’ve been part of the establishment for so long, the radical nature of what we believe and proclaim has been muted and accommodated. Equally, we forget we have never been a mass-participation sport; and when we have resembled one, it’s usually been through coercion or compromise. Nowadays, when many of the establishment supports – which weren’t worthy of us anyway – have been removed, we’re playing catch up.

This would be good news if we didn’t keep on trying to regain our place at the table; a place of significance. So, in recent generations we’ve attempted to harness the technologies and strategies of advertising; we deploy the categories of ‘relevance’ and meeting peoples’ needs (forgetting that Jesus rejected all of that!). Essentially, to our shame, we have sought to make our understanding of the world and our story of who Christ is and what he has done more palatable; more reasonable.

More than this, we’ve allowed it to become something which you can, as it were, bolt-on, to a life already determined by other more pressing loyalties and priorities. We so want to be wanted that we seem profoundly timid about calling people to completely reorient their lives around Christ and his will for them. Gone is the language about “dying to sin and rising to new life” which is at the core of our Baptism service. We run a mile from “born again”.

But we’re left with Christianity without a cross; without inconvenience. Well, using advertising language, it seems to me we’ve lost confidence in our product. The cross, he says elsewhere is ‘the power of God’. Paul says, “Brothers and sisters, join in imitating me, and observe those who live according to the example you have in us. For many live as enemies of the cross of Christ”.

Paul witnessed in the Philippian Church, what happens when the significance of the cross for shaping the life, character and behaviour of Christians is betrayed. The first error is to forget the big story of a beloved world gone wrong and the God who reaches out as a Saviour. The secondly is losing sight of our true citizenship and the Church as an outpost of the heavenly Kingdom. Thirdly, we try to package the message in any way we can so as to make it Cross-free and acceptable.

However, I have a sneaking suspicion we do this not only because we think it will sell better (which it won’t) but as a way of shielding ourselves from the unpalatable truth that Christ doesn’t mince his words when he says, “Take up your cross and follow me”. After all, if we don’t proclaim it to others, they won’t be able to ask, “Well what about you, then?”